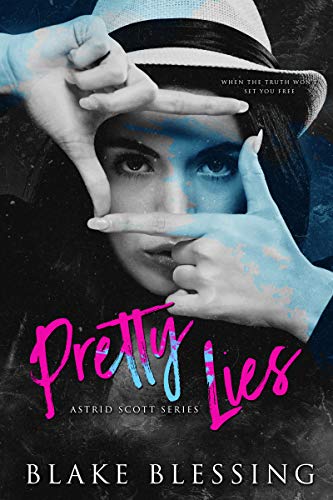 Pretty Lies is book 1 of the Astrid Scott’s series. A YA Contemporary Romance Reverse Harem written by Blake Blessing. A hot mess of an indie author that I am so happy to have stumbled upon. Now. I know this novel is marked as a YA, but when the main character is in her senior year of high school and right at the cusp of 18 years old, i’m going to go ahead and throw it into the NA (New Adult) category. Even though there isn’t sex in book 1, or really anything of that matter. Book 1 is meeting Astrid, establishing her harem, getting to know the guys, and learning about their lives. Trust me when I say it is both entertaining, hilarious, sad, and maddening at times. However, well worth it.

This is my senior year, and not only have my parents moved me to a new place where I know nothing and no one, they are determined to make me fall in line with the life they want me to have.

Not the life that I want. But what fits perfectly into their world.

I’m looking for any possible way to escape this prison and leave them behind. Which has been harder than I thought.

An opportunity to escape appears. And I’m going to take it. I’m going to use four so-called perfect guys in this new town to make it happen. The ones that have it all, or so everyone thinks.

And they’re going to be my ticket out.”

The synopsis is vague in that Pretty Lies could be about anything. However, it does its job. It hooked my attention when I read it, except for what actually happened was a little different from what I understood on the synopsis. Due to the book just releasing I would rather keep my speculation to myself to avoid any spoilers.

Astrid: Astrid Scott’s character is a wallflower. As many of us were in high school (myself included), she just wants to make it through senior year and move on with her life. Except for Astrid doesn’t have the best home environment. She has a love for taking pictures with her phone, and sitting in the library in peace. She isn’t a people person, and prefers to fly under the radar. (I approve.)

The Harem: I was actually having to speculate on who was going to be in her harem, which was kind of fun. Most reverse harem novels tend to let the reader know (in some form or fashion) who the guys are going to be, and it’s usually fairly obvious. Not in Pretty Lies. I loved that aspect that I was introduced to different characters and had to actually sit there and think, “Oh, is he going to be one of her guys?” There was even a moment when some characters were introduced and I thought, “Hell no, not that one!” I may have even made a retching noise. Lol. Once they were established, they felt like an unlikely bunch, but they felt right.

Bullying! This novel does contain bullying. Do not confuse this one with all of the bully romances going around because that is not what this novel is about. This is high school, people are shit heads in high school. Everywhere. Astrid has to deal with her fair share of them throughout Pretty Lies. Rest assured, she doesn’t take the abuse like a punching bag. The guys are also protective of her, which is sweet.

I can honestly say that I loved this book! There were numerous times that had me laughing out loud. Some moments where I covered my mouth on reflex to either *Le Gasp!* or have an “Oh my God” moment. There was even a couple moments where if what situation happened to Astrid, happened to me? I’d have died from embarrassment. Ha. Again, no sexy times but I have a feeling they are in the horizon. Almost a little hard to believe at that age. I myself, began my escapades at 17, but it’s not unheard of.

Quite the clever, entertaining, and fresh read. It’s been forever since i’ve read a YA, and I was surprised at the complexity of it. I wouldn’t place them with your average teenagers. Astrid Scott, and her guys have a long road ahead and I’m looking forward to reading their story.